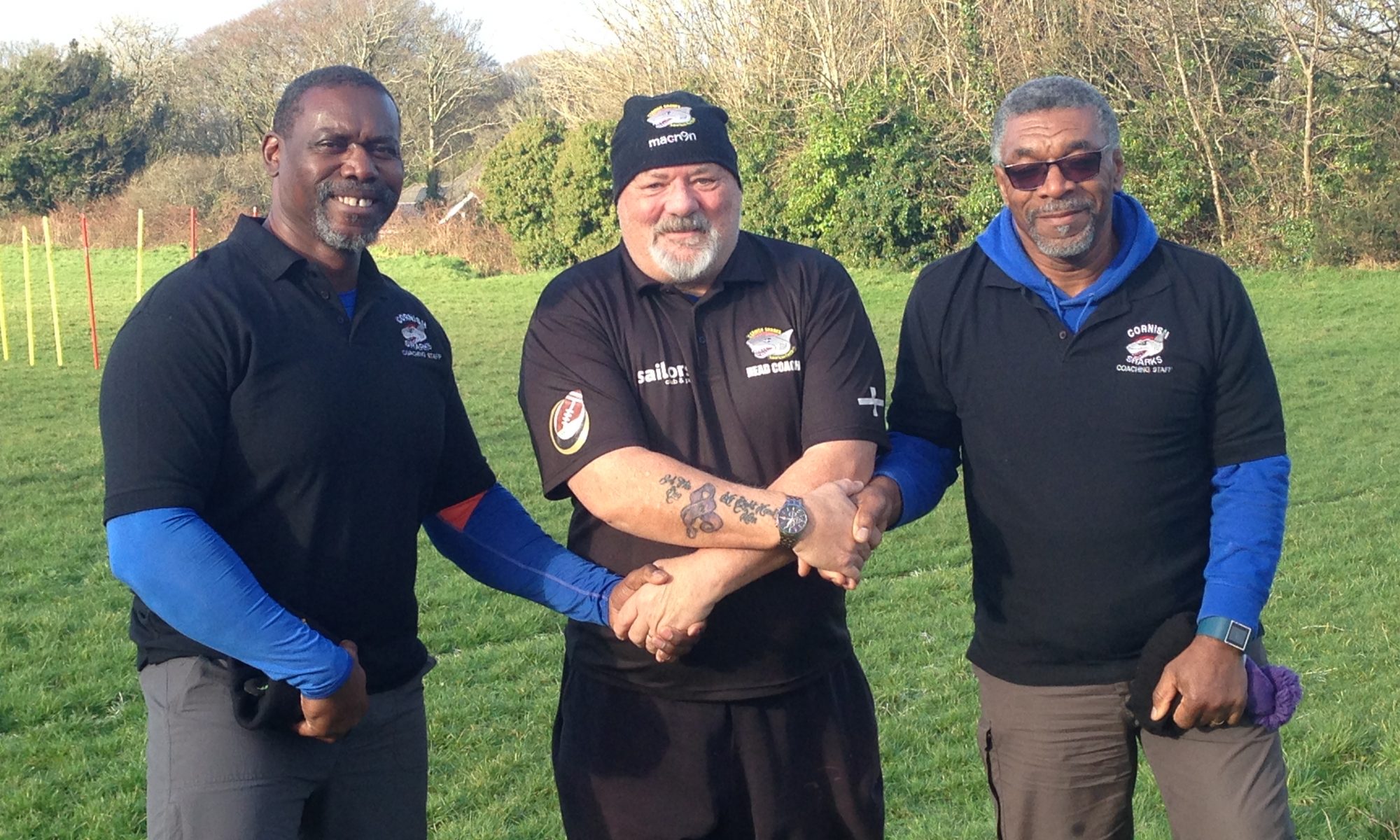 The Cornish Sharks has kicked off its new year training and recruitment campaign with the announcement that John Aska, best known for being a founding player and Chairman of the legendary London Ravens has joined the coaching team.  Returning for another year will be Nigel Hoyte, who also has an impressive Britball CV, as Offensive Line Coach.

The winter sun highlighted the smiling faces of Coach Brian Smallworth, Coach John Aska and Coach Nigel Hoyte as they shook hands to cement their commitment to the Cornish Sharks American Football Team for 2018.  Although a chilly day, both rookies and existing Cornish Sharks took to the playing fields in Redruth to warm up and start preparations for the coming season whilst Coach Smallworth expressed his delight that John Aska has decided to rekindle his love of the game and help the Cornish Sharks move forward:  “John is Britball royalty as far as I am concerned.  The London Ravens, the team that John helped set up and manage, was one of the best American Football teams to have ever played the game in the UK.  They won National Championships two years running in the 1980s and were unbeaten from their formation in 1983 until 1988 with a 63-game winning run.  John played linebacker and was an outstanding athlete who represented GB from 1985 to 1987 as well as playing for the Ravens in Eurobowl in 1988.  I have known John for many years having played and coached against him and as both of us have been involved in the game since it started in the early 1980s our paths crossed many times at management meetings too.  I am delighted he has agreed to share his knowledge and experience and I know his passion will inspire the next generation of players in Cornwall.

“I am also delighted to welcome back my friend and Coach Nigel Hoyte who has been part of this organization for some 10 years now.  Nigel and John of course met at the London Ravens before Coach Hoyte went to Akron University in the United States to play college football before returning to the UK bringing his huge experience to the London Monarchs in 1991.  Coach Hoyte’s son Elliot (who also played US College Football at Boise), was instrumental in my meeting Nigel a decade ago when he came to a game when the Sharks were playing in Plymouth.  He will bring so much to our offensive line and I will appreciate his knowledge and support which he has demonstrated for many years”.

John Aska explained a little more about his experience in the game: “After the fantastic years at the London Ravens, I also played and coached at the Farnhan Knights, another team with an impressive pedigree, as well as gaining coaching experience in the US in Wisconsin, Chicago and Boise.  Although I didn’t participate in the UK game for many years due to building my career in IT, never a week goes by without me watching something to do with American football – I love the game.  Now, having moved to Devon only seven months ago, I have been tempted to get involved again as I approach retirement, and would love to bring my experience to the Cornish Sharks to help a little team with a lot of heart, become bigger and better.”

Asked how he felt about joining the Cornish Sharks, John smiled and said: “I’m looking forward to brushing up my coaching skills – I need to get up to date with new techniques such as ‘Head Up Football’ and refresh my coaching badges.  But I am excited about joining the team although approach today with a little trepidation as there will be certain expectations and standards that I want to install at the club over the next few weeks which may be a challenge, so perhaps you should ask me again in a few weeks’ time!”

Coach Hoyte expressed his views about committing to another year at the Cornish Sharks: “I enjoy working with Coach Smallworth and coaching gives me an opportunity to give back to the game I love.  We coached GB Youth together previously and I want to work with him to see what we can do to grow both the youth and senior teams, to secure the future of the game in Cornwall.”

Alongside Aska, Hoyte and Smallworth, other members of the coaching staff announced so far are Richard Atkinson (founder member and former QB player and Coach for the Cornish Sharks, previously the Duchy Destroyers and London Mets) as Assistant Head Coach and Offensive Coordinator; Mark Tanner as Offensive Positional Coach, (Mark has played for the Sharks before and previously was with the Plymouth Admirals and Welsh International); Matt Cann Secondary Coach (previously Sharks Youth and Senior player – secondary and Running Back) and Matt South Wide Receiver’s Coach (Sharks WR player and professional coach).

Coach Smallworth finished with: “The Cornish Sharks is busy recruiting players now and anyone who fancies giving the game a go should come along to training on a Sunday in Redruth from 1pm to 3.30pm.  It doesn’t matter whether you have played before or not, you have great coaches to teach you the game.  Rugby and soccer players transfer well over to American Football but I have also seen cricketers, runners, cyclists and even ‘couch potatoes’ earn their spot in this game, which suits anyone of any build or level of fitness.  If you fancy it, come along and give it a go.  We are also looking for people who enjoy the game but who don’t play or coach who could support us in all areas of running and managing the club, so please get in touch if you’d like to be part of it.”